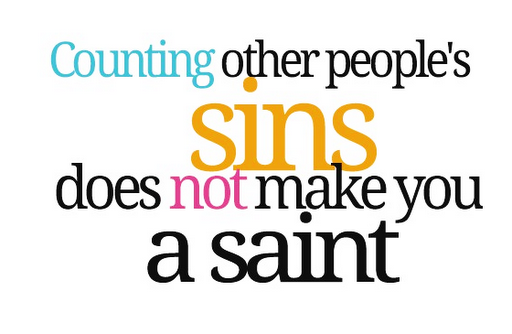 The Bible has a whole lot to say about judging others, (a sprinkling of which you will find here) and it's pretty clear that it's a religious no-no akin to a diabetic drinking regular soda and ordering funnel cakes at the fair. So why, then, are religious people sometimes the most judgmental? I have to say, it's a huge turn-off, and one of the main factors that kept me away from organized religion for so long. It also has me questioning why I went back.

I can sort of understand the church itself taking a stance against certain issues...after all, someone has to. And some things are clearly right or wrong even in the secular world. You don't need a Bible or any of the 10 commandments to tell you that you shouldn't kill someone. But when a layperson then uses the church's stance to look down on another, well...that's a different story. Just who the hell (pun intended) do they think they are?

The church has been wrong before.


Did you know that the Catholic church considered slavery morally acceptable, as long as the masters treated their slaves humanely, from day one until after the Civil War? That Galileo was condemned in 1633 for teaching that the earth revolved around the sun, not the other way round as the church believed, and the poor guy wasn't let off the hook until 1992? That the church taught sex in marriage to be a necessary evil for the procreation of children until the 20th century? (citation).

And they will be wrong again. Especially with new things that involve technology, like the IVF we are now planning.

For those of you who aren't Catholic, let me tell you that the church is against this modus operandi for getting pregnant. We have already had someone vocal in their lack of support for what we're doing. Why? Well, some of their objections are as follows:

You may think I'm making this up, but it's actually all right here, in the church teaching on IVF. Numbers 1-3 are laughable and so there's no need to even offer a rebuttal. But I take issue with number 4, which is purely just a lie. "Most" embryos don't die. And the ones that don't make it when fertilized in the lab, would not have made it had they been fertilized in utero. Its the same reason miscarriages happen: not all fertilized eggs have the right chromosomal or genetic components to thrive, whether they are in the womb or in the lab. It's not like there is some mad scientist who goes in there stabbing all of the 8 cell future humans. And even the church, who believes human life starts at conception, calls them embryos.

And to the second part, that they are used for research: they cannot be without our written permission. Should we have any left over, we have decided we will not have them frozen "indefinitely" (impossible since you have to pay a yearly fee) or discarded, we will use them a few months after our first child or children are born.

In couples with undetermined fertility problems, sometimes the egg is getting fertilized, but is not implanting. Or, the egg is fertilized, but not picked up by the Fallopian tube. Remember, it takes almost two weeks to actually become pregnant. One could argue that couples who continue to do this instead of seeking assistance are killing more embryos than if they went the IVF route.

So, back to my question: why are religious people often the most judgmental? With my background in psychology, I would hypothesize that judgmental people are insecure, and people who feel bad about themselves often feel somewhat better judging others. These same people may also be more inclined to cling to a religion. Or, maybe they're not more judgmental, they're just more vocal about it. It is, after all, somewhat normal to judge in some ways for survival, the focus of countless studies done on in-groups and out-groups. We've all done it. Or maybe, religion can sort of create that in those who may otherwise not be very opinionated about it. I guess only God knows.

But all of this does have me somewhat reluctant to call myself Catholic, lest I be confused with people like them. But, I don't want to throw the baby out with the bathwater and I have to remind myself that, as my husband says, no one "owns" Catholicism. And, both of our sets of parents are in full support.

I should have sympathy for those who feel the need to judge, not judge them for their judging. I also have to remind myself that many of my friends, even those most pious, don't have a judgmental bone in their body.

I'm quite excited about our decision, and my appointment tomorrow. And if there is a God, I know he will be more than pleased with my route to becoming a Mom. Especially if it means that my Mom gets to realize her dream of becoming a grandmother.
Posted by Megan Heather