We had a small gathering of twenty or so friends this past Saturday at our gender reveal party. Gender reveal parties are relatively new thing, much more low-key than a shower. Sometimes, the parents-to-be know what they are having and throw the party to inform friends and family. But in our case, neither of us knew. As people arrived, I greeted them and asked them to cast their vote for either TEAM PINK or TEAM BLUE, wear a pin showing their vote, and put a raffle ticket into the corresponding jar.


We had pizza, visited, and caught up, but to me, it was all just passing time until the main event: the cake-cutting. As the time drew near, I became more and more excited and...nervous. It's customary for the parents-to-be to say "We just want a healthy baby!" But I didn't. I wanted a girl as our first child more than anything in the world.

Nathan and I stood behind the cake table with everyone watching us. As much as I had been wanting to know, I hesitated in cutting it. Someone called out asking if I was ready, and I responded "I don't know." Cautiously, we made one slice, and I could not see any color at all. Then slowly, we made the second slice. 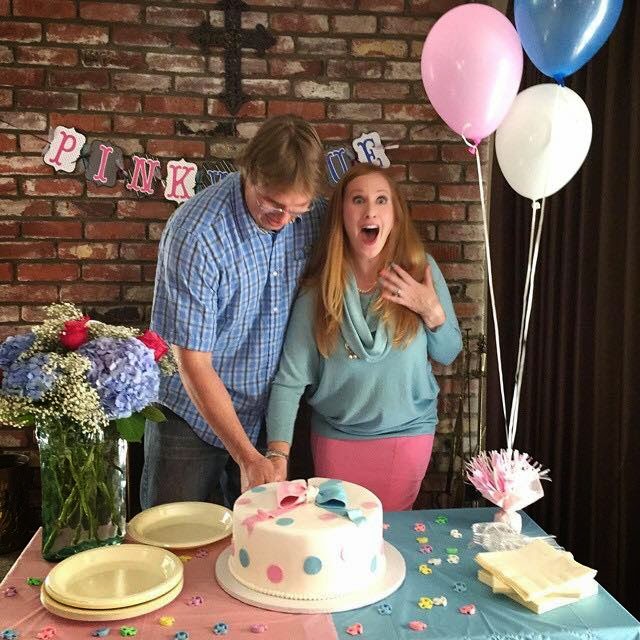 It is impossible for me to sum up the elation I felt after the second cut in our cake revealed a bright pink cake color, but the video below does a pretty good job. I actually screamed when I first saw the unmistakably pink cake. It will always remain one of the happiest moments in my life.

My Mom's first child was a girl, and her Mom's first was also a girl. And now, my first will be a baby girl too. As strange as this may sound, when I was in my Mom's womb, the egg that would become my little girl was there with both of us. From this week's development update at 13 weeks:


Fingerprints have formed on your baby's tiny fingertips, her veins and organs are clearly visible through her still-thin skin, and her body is starting to catch up with her head — which makes up just a third of her body size now. If you're having a girl, she now has more than 2 million eggs in her ovaries. Your baby is almost 3 inches long and weighs nearly an ounce.

It is comforting for me to remember that even before my Mom was born, the very egg that would become me was there. And when I was in my Mom's womb, this new baby girl I am going to have was also there with me, and with my Mom. This simple developmental fact takes on a whole new meaning right now for me. I have been trying very hard these past few weeks to still feel close to her, and remind myself that instead of her being gone, she is with me, in everything I do and all that I am.
Posted by Megan Heather