My Marathon and Ultra Training Schedule

For my training plan I incorporated the ultra training I found here (thanks Sandy!) into my normal marathon training. Each training period is 12 weeks, but since my marathon is on November 12th and my ultra is 3 weeks later, on December 3rd, I now have a 15 week training plan. I made one modification to the ultra training, cutting a planned 20 mile on October 24th down to 10 miles, so that I still have two weeks of tapering before my marathon.

One difference between the marathon and the ultra training is that starting in October I will also have long mid-week runs. But the main difference will be the back-to-back long runs. Starting in September, I will follow each of my long weekend runs with another long, albeit shorter, run. This will be a completely new experience for me, because I never run the day after a long run! It's also going to make my weekends a whole lot less flexible!

When I'm training for a marathon, I only have one long run each weekend, and it doesn't matter if I do it on Saturday or on Sunday. So if I have something planned that takes up an entire weekend day, I just switch the day of my long run! But now, I will need to run long on Saturday and Sunday...and I have always have to do the longer one on Saturday.

On my rest days, Monday and Friday, I plan to incorporate some cross training like yoga, weights and swimming. I'll also try to continue my weekly massages when I can fit them into my schedule. My goal is to get through this training without injury. I'm a little nervous because I ran 10 yesterday and 4 today and every time I got up from sitting at my desk today I was stiff and almost visibly limping. It's mostly my left hip flexors, more specifically my psoas, which are really tight, in spite of all the stretching I've been doing. I'm a little nervous that I'm going into this without enough recovery following the Missoula Marathon. We'll see! But, I'm doing both of 'em no matter what.

There's a misconception that people who run actually like running for hours on end. We don't. At least, I don't. Who actually wants to get up early on the weekend and run for hours and be completely wiped out afterwards? Some people I'm sure, but I think they're weird. But, for countless reasons, the good outweighs the bad...and I stick with it, going through phases where I like it, and times when I loath it. Currently, I'm stuck in the latter.


I returned from the Missoula, Montana marathon late on July 12th and was out running with our Cross Country team on July 14th. We did 4 miles, 3 miles the next day and 5 on that Saturday. I usually take a month off from running following a marathon, but with coaching I wasn't able to. But, I felt good! I was excited not to have any pain, and I was running at a 9 minute pace without trying! I enjoy encouraging the kids, and seeing their progress inspires me. I was out there 5 days the following week, running with them, and logging over 20 miles. It felt effortless.


But then, for no apparent reason, this Tuesday I ran 4 miles with the team and it was extremely hard. I was going slower, yet it felt I was expending more energy. Back at work, I have not ran since Tuesday. And, just when I was thinking I would take a week off, I found out that I'm leading practice next week, meeting the students at 6:30 am before I go into work. Our coach (I'm an assistant coach) will be with the majority of the kids up at camp in Big Bear. But those who aren't going still need to run! That's where I come in.


And then, I noticed that the marathon is 13 weeks away, the minimum amount of time required to train. So, tomorrow is officially my first day of training for the Santa Barbara Marathon! And, like it our not, training begins.
Tomorrow our XC team has a 2 mile run. I'm going to run to the start from my place and then run afterwards to get my 10 miles in.


Because I also have my 1st ultra marathon, the North Face Endurance Challenge on December 3rd, I will also need to follow some of the long runs listed above with long runs. I know that I will need to run 10 miles the day after the Santa Barbara marathon. Beyond that, I'm not sure what my training for the 50K will look like! Yikes. I guess I need to start reading the book I bought two months ago: Relentless Forward Progress. This is completely uncharted territory for me, but I'm excited. I think.


I've ran long enough to know that bad runs happen. I just need to push through this and it will get easier; it always does!
Posted by Megan Heather 2 comments:

Cantaloupe and Cucumber Salad
I found this recipe in the current issue of Runner's World Magazine and made it for dinner tonight. It was easy and delicious, combining flavors I wouldn't normally pair! Next time, I would add shredded chicken and almonds for some extra protein. Also, I only added 4 oz. of goat cheese, and it would have been better with the recommended 1 cup.

“Cantaloupe adds an irresistible color, crunch, and sweetness to this vegetable salad,” says Wells. One cup of the hydrating fruit provides more than 100 percent of your daily need for vitamins A and C and a good dose of potassium. 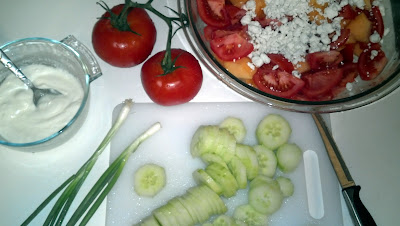 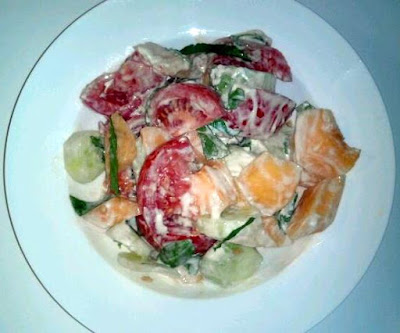 
PATRICIA WELLS’S most recent cookbook tour (for her 12th book, salad
as a meal) brought the French resident back to her native United States.
“The weather was pretty awful, so I spent a lot of time on hotel tread-
mills,” says Wells. “But in New York I did manage many runs in Central
Park.” The founder of culinary schools in Paris and Provence, Wells, 64,
has been running since she was 21. For more, see patriciawells.com.

Motivation: 101 Reasons to Run a Marathon

Motivation: 101 Reasons to Run a Marathon - by Davy Kestens
(Shamelessly lifted this from the Run Addicts website.)