Mom's having another round of chemo tomorrow and will be down for the count for at least 5 days. I don't have work again until January 6th, and plan to be with her as much as possible, especially for the 5-6 days that will be her worst.

I have found the perfect project for us to work on! I'll post photos when we're done. 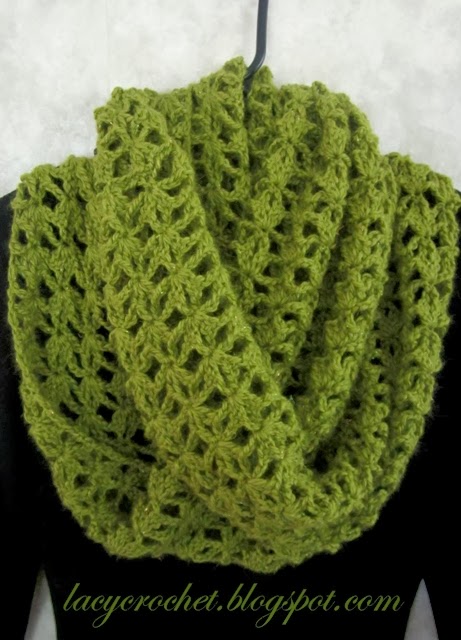 (This pattern and more found over at Lacy Crochet.)

Since the stitch used for this scarf is hardly elaborate, it’s a good quality deluxe yarn that made all the difference. I used Plymouth Yarn® Baby Alpaca Worsted, which created a beautiful drapey fabric.

My scarf turned out warm and bulky, but personally I like that look. But if you’d prefer a slightly lighter version, try making this scarf with Plymouth Yarn® Baby Alpaca DK .

Repeat Row 2 – Row 3 until your scarf measures about 65 inches. Fasten off, but leave a tail long enough to stitch the shorter ends of the scarf together.


Lay your scarf on a flat surface. Flip one side to form a twist. Stitch the shorter ends together using a tapestry needle. Wave in the ends.
Posted by Megan Heather 3 comments:

Religion exists on a continuum

The world gets less black and white and more grey the older you get and the more you learn. I remember being surprised to learn that sexuality exists on a continuum: people aren't simply gay or straight, but fall somewhere in between.

So then why has it been surprising to me to discover in the last year that religion also exists on a continuum?  There are staunch atheists on one end, and those who know there is a god without ever faultering on the other, but most of us fall somewhere in between.

When I started the classes for my confirmation, I thought somehow a switch would be flipped and I would believe or know. Of course that didn't happen. All I ended up with were more questions. So then, I thought maybe at the actual ceremony I would think or feel differently and know there was a god. Again, nothing.

But, it wasn't just nothing. Somewhere between those classes and today, my world view has shifted and instead of considering myself agnostic, I am now open to the possibility that there is a god; maybe he does have a plan. A few years ago, I would have said 'religion is a crutch that people cling to in times of need.' Maybe it is. And what's so wrong with that? Here I sit, in my greatest time of need, staring loosing my Mom in the face and I have to say I'm clinging tightly to what little faith I have formed. I've heard that during tough times even those of very strong faith can falter, even becoming angry at god. It honestly surprises me that even though I'm in the formative phase of my belief in god, it has not lessened. I could look at this situation with Mom as unfair (it is!) but instead, have somehow been able to feel lucky, even blessed, to have her yesterday, today and tomorrow. Just a few short months ago, we were talking about the possibility of having to move the wedding up so she could be there, yet our wedding day came and went and she was able to have a blast. She even got out out on the dance floor.

I want more time with her, and I always will. The only thing that has gotten me through all this is focusing on the time we have now, and trying to make the very most of it. If there is a god, maybe he made sure I wouldn't be alone in this and chose to wait until I had Nathan in my life. Maybe, he has already answered my prayers in making sure she was at the wedding and was able to enjoy it. She had her 2nd dose of the new chemo, carboplatin, while we were on our honeymoon and was suffering for 5 days. She couldn't even sleep for more than an hour due to the pain.

When I pray, I don't focus on her to be cured...because I know there is a 5% chance of that. I thank god for this time I have now, ask for the strength to put on a brave face and enjoy it. I ask that she not suffer too much. I ask that she be there to see her first grandchild, and throw in the 'please cure her part' at the end. Maybe I'm too afraid to hope for that. Maybe my faith isn't strong enough yet. Maybe I just realize and accept it's not possible.

This weekend may be one of the last that Mom feels alright. On Monday, she will have another scan, and on Wednesday, we will find out if it's working. She will also have another dose of this new chemo which knocked her down last time; the side effects of which may be compounded.

So, instead of sitting around and dwelling on it, we're off to Temecula. I'm going to try to enjoy the hell out of this weekend, pun intended. I will continue to pray, if not to help Mom, because the very act of it seems to be helping me. And I will continue to move along the continuum toward those who know there is a god without ever questioning it, and away from how I used to feel.