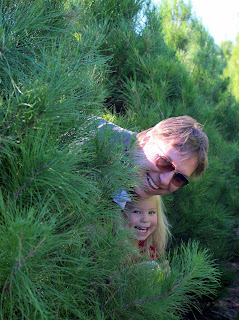 We started the weekend of her 30th month Christmas tree shopping and with seeing Santa at the mall. I always loved Christmastime but now, seeing it through her eyes brings it to a whole new level, layered with so much more meaning.

The second weekend, we went to our local bookstore for a mini-photo shoot offered, free of charge. For younger readers, a bookstore is what was around before amazon. It was close to her nap-time, but she was still as good as gold. As a reward, the photographer gave her some fruit snacks. She was munching on them as I was shopping, and she kept putting her finger in her mouth. Finally, she said "Ouchie" and I asked her to open her mouth, and looked inside. I moved what seemed to be a chunk of fruit snack on her lower left side, and noticed a molar poking through. It was her gum that I moved. We went home and for the first time, she willingly put ice on her ouchie, resting an ice cube in a bag on her new molar. 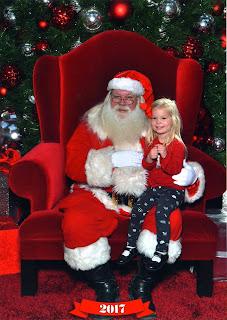 I never want to forget "Breakfast with Santa" that her daycare hosted. I arrived just before Santa stopped in each classroom to say hello. All of A's classmates were sitting Indian style, and after giving her a great big hug, I sat next to her in time to see him open the door and come in. The kids stood up, and swarmed to him. Baby A was hopping up and down with excitement, and he gave her a high-five. 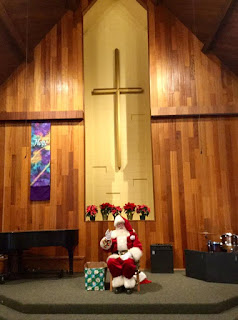 We all filed into the church that her daycare is connected to, and Santa was there waiting, with a wrapped book for each child. This was our second run-in of the season with the man in the red suit, and she no longer cries! She approached him and I was able to snap a few cute pictures. This is a 180 degree change from last year, when she was terrified of him.

Also unlike last year, she no longer cries when I leave the house to go somewhere. I was getting ready for a Christmas event with my running friends and she asked "Going, Mommy?" When I told her I was going to see my friends, she was fine with the response and didn't cry at all. I still do not like being apart from her, though. Don't get me wrong, it is nice to carry on an adult conversation without being interrupted, but bringing her is my preference. Hearing this, a dear friend of mine who does not want to have kids chided me, texting "You need nights out and a break from her!" But that's the thing, I do not feel like I ever do. I spend close to 40 hours away from her with my job as a school counselor, and when I'm off work all I want to do is be with her.
Her communication and sentence-speaking abilities are through the roof now. It's so nice to know what she wants, and have some insight into what is going on in her mind. "Beast take a bath! Beast stinky." Just the other day, she started singing the ABCs song - and surprised us by getting through the whole thing! A few letters were approximations, but she knew it even though we have not really been practicing at home. When she gets out of the car, she will often point to the 'Suburban' lettering that is at her eye level and start singing "A, b, c, d, e..."

Her sense of humor is also developing in the cutest ways. One Saturday, she went on a bike ride with Daddy for hot chocolate. As she was drinking her cup, it started dribbling down her face. Daddy said "That's not really how it works..." to which she responded "Shhhh! Quiet."

A few weeks before Christmas, we stayed at the "Wolf Hotel" again. Within a few minutes of arriving, there was a lour vacuum-cleaner noise in the lobby. She quickly got next to me and hugged me tight before realizing that snow was falling. She was so excited, but not nearly as excited as when she looked out the window and saw all of the water slides. Just like last time, the huge blue one was her favorite, and she wanted to go again and again...sometimes 10 times in a row! 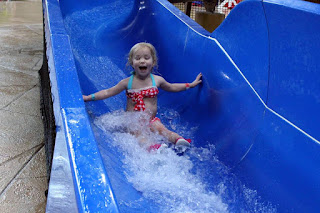 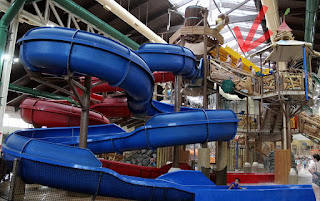 The build up to Christmas has been so magical - my favorite year...ever. The magic that I felt as a child anticipating Christmas has nothing on this. I've really never been more excited for Christmas.

This year, she is asking Santa for a "Lil' baby. And cars." 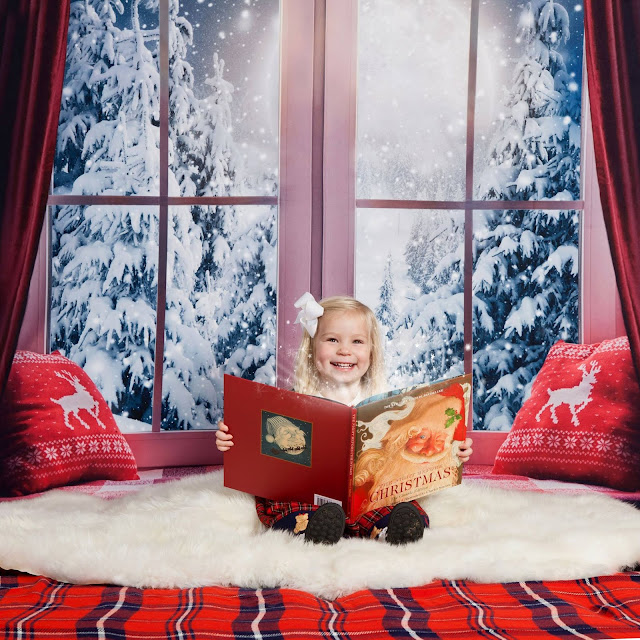 And we were able to have Christmas morning twice! On Saturday, my Dad and brother arrived early for a big pot of coffee and a breakfast of eggs, sausages and toast like Mom used to make. Then, we dove into all the presents! Her last present was very large swing-set in the back yard which we worked diligently to keep hidden. Although we purchased it on a black Friday deal, we didn't have the two day installation start until Thursday. We put up paper on the sliding glass door so she could not see out, and didn't let her into the back yard, which she usually has free access to. Then, we wrapped it in red and green paper. It is larger than the one at the local park we walk to regularly, and I hardly slept that night before because I was so excited! A separate Christmas posting will follow.

On Christmas Eve, which fell on a Sunday, we flew to Oregon to spend a week with my husband's parents. I love how cold it is up there, and the chance of snow. On her first Christmas, we received a very light dusting on Christmas Eve, which helped make up for all of the years I tried to will away the 80 degree southern California sun.. It feels like Christmas there, and I love the unstructured days and relaxing with his family.