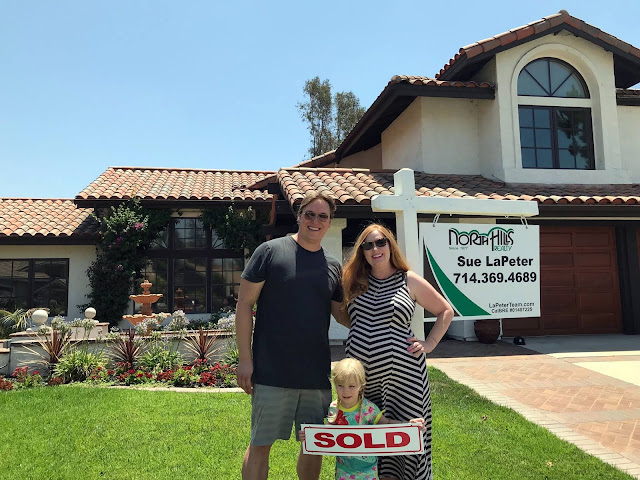 We started a new tradition this July: Going to Orange County Mining Company for a late dinner on the third to watch the fireworks at a local high school. Baby A found it very exciting that we were going up the "big mountain" to see fireworks. We had reservations for 8:15, and the fireworks started about an hour later, as we were having dessert. We also bought fireworks from a local stand and let some of them off that night, although she was a bit uncertain and tentative. 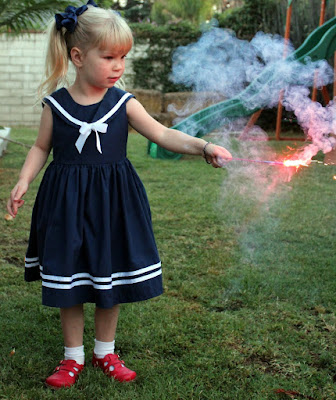 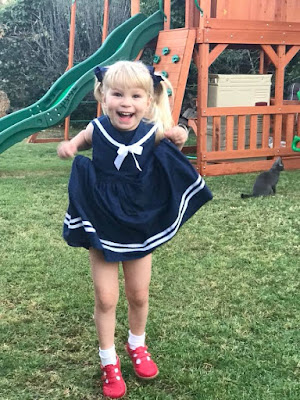 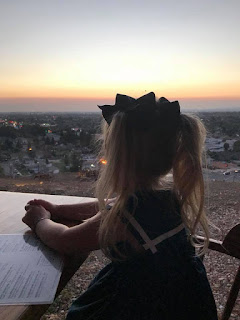 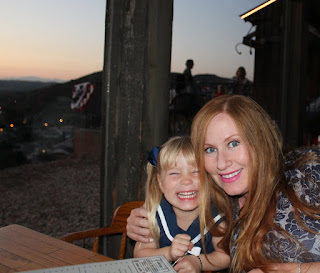 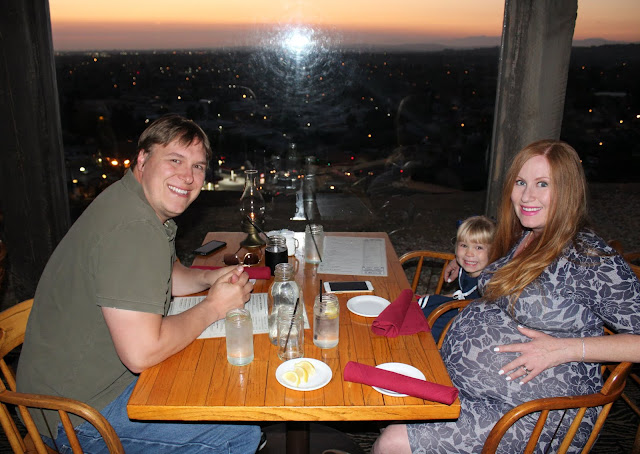 On the morning of the 4th, we walked in a local neighborhood parade, something that is becoming increasingly difficult for me this far in my pregnancy. We saw family for lunch, and then after nap, Makenna and Michael came over for ice cream cake and fireworks in the street. Because Michael and Makenna were so into it, she was much more enthused, jumping up and down and squealing with excitement. 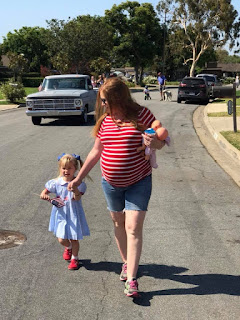 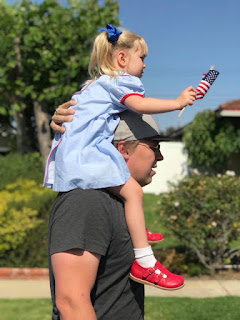 After setting off the fireworks, we drove in the convertible and parked to watch more at a different local high school. She had such a great time that she didn't want the night to end, and asked for fireworks for the next week or two. I realized that the 4th of July has never been so much fun for me. She breathes new life and excitement into all holidays and it just doesn't compare to before having children!

This month, she was officially, effortlessly potty trained! She had been going "number 1" in the potty since Christmas-time, but had yet to attempt number two. Luckily for us, she would at least announce "I have to go poops!" and ask for a diaper with plenty of time to spare, so she wore underwear. When she would announce this, I would periodically ask if she wanted to try her potty and she would say "No, I go poops in my diaper" and I dropped it. I never forced the issue, remembering what my Mom would say: Don't worry, they won't be doing (FILL IN ANY BEHAVIOR HERE) on their first day of college.

But with our baby boy arriving next month, I wanted potty training complete! I bought a few toys to bribe her with at the .99 Only store. The next time she asked for a diaper, I told her she would get a toy if she used her potty. "No thank you!" she quipped. But then I showed her the toy. "Oh! Okay!" she said and ran in to use her potty! It's been almost a month since then, and she hasn't used her diaper since or had one accident. She has been sleeping with a Pull-Up, but has only needed it twice.

This month, things were a bit chaotic at home because we started packing to move! Just weeks before our baby boy arrives, we have sold our home and purchased a new one about 8 miles away. Starting last month, our weekends were consumed with open houses and tours of homes. We had listed ours but were doubtful we would find another worth selling for. My husband's plan has always been to rent ours out and purchase another. But with this plan, we would be buying a slightly nicer yet similar home, not "buying up" by much. 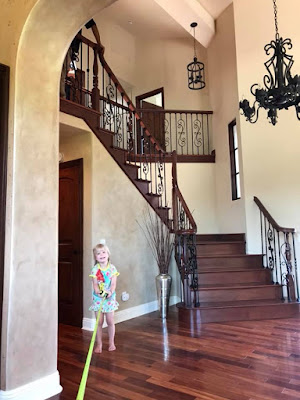 We must have looked at over 30 homes, many beyond our budget when we found the perfect one. Two stories and almost 3,000 square feet, the style of this home was one we both loved, especially when compared to all of the cheaply done flips we toured (read: all grey and white). It wowed us with a lot of upgrades throughout (like an aromatic steam shower, media closets, and built-in surround-sound) and features in the gourmet kitchen that I've never heard of, such as a warming tray and pot filler. At just over 10,000 square feet, the lot size was decent but what really sold us was the fact that it is at the end of a cul-de-sac and backs up to wilderness: a creek connected to a regional park. There is a gate from our backyard out to a network of trails! Even though a half-mile walk around the block is almost too much for me at this stage in my pregnancy, I cannot WAIT to get out there before sunrise and go on a run! We offered $25,000 over the list price and then countered with $5,000 over that and waited to see what happened.

Up until our offer was accepted, I told myself that I was "good either way." But all that changed when our offer beat out the others. Suddenly, I saw the kids' rooms set-up, future Christmases, and her coming down the stairs to leave for prom. It was touch and go for a few different reasons, and when finally official (we signed all the paperwork yesterday!), I was elated! But that left us with only a few weeks to pack up our whole house, which I am slowly working on now, with the majority of help from my husband. If all goes according to plan, we will close on the day of my scheduled c-section: August 6th! 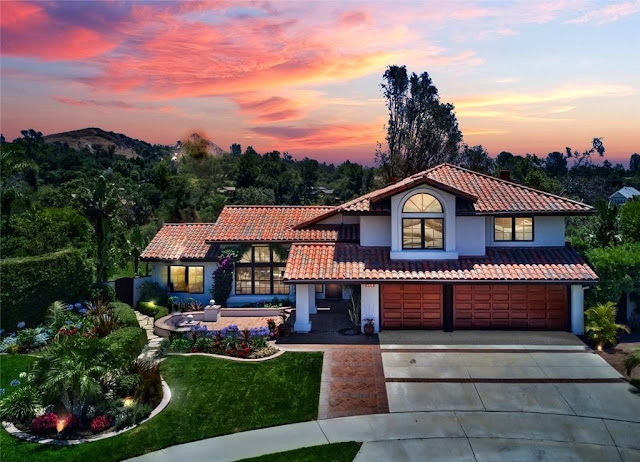 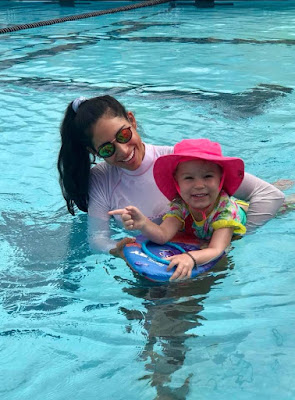 Baby A completed 4 weeks of daily swim lessons. She learned to kick on the kick-board, then the less-supportive noodles and went under a few times. There were days she didn't want to do what her teacher was asking and would cry a bit, but she still listened and followed directives, exiting the pool with a few tears. On the days that she did well, we took her to the Dollar Tree to pick out a toy. On the days that she went under, Dad would split a chocolate shake with her. We have a salt-water hot tub level with the ground at our new home and although small compared to a pool, water safety is very important. Drowning is the number one cause of unintentional death among children ages 1-4.

Amidst all of this chaos, we worked in a lot of fun summer activities despite my waning energy level. Multiple trips to the splash pad, Marina Park, a summer concert at the local (small) zoo and a trip around the block on her bike almost daily. She also loved when I would sit in the backyard and "Make it rain" with the hose, so she could run through. She especially loved this in the trampoline, and was often "Naked as a jaybird." 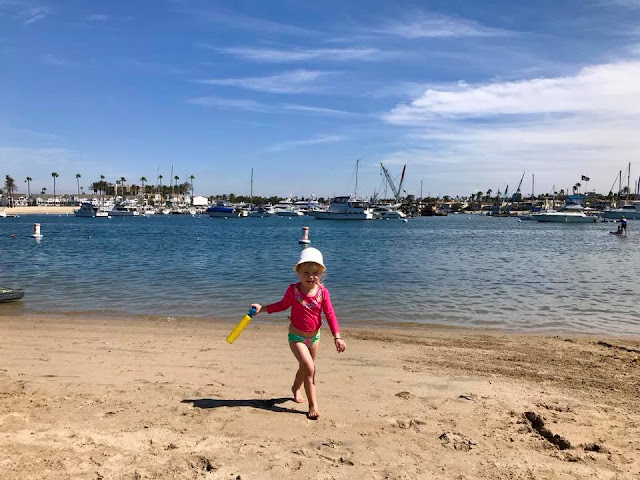 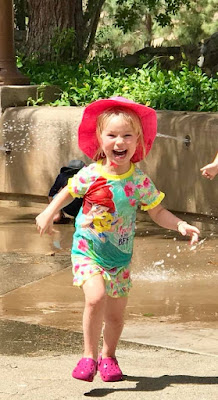 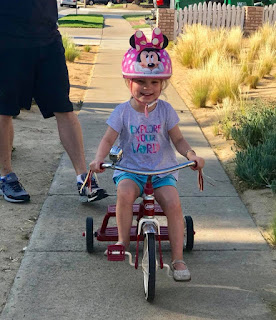 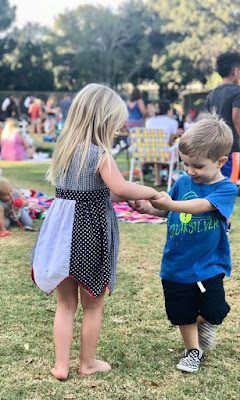 At the beginning of the month, she was going around the block on her tricycle. By the end of the month, we were both surprised how well she was doing on her "big girl bike" that Beast gave her! After about 30 minutes of practice out front,

she surprised us both by going around the block without help, something we now do daily after nap. Although she had the bike for a few months and hadn't used it, it was just like potty training; one day she made up her mind to do it and never looked back. 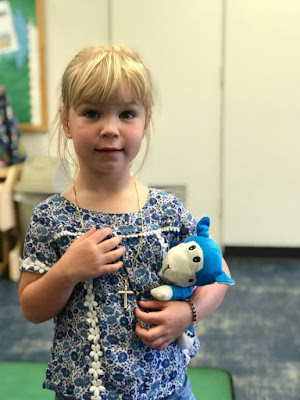 We finished the month with a week of vacation Bible school (VBS) at Calvary church. The theme was Shipwrecked with the message that when you are sad, lonely or scared, Jesus rescues. I volunteered in her small class from 9-12:30 every day, and loved watching her interact with the other kids. Surprisingly, she did her own thing most of the time, only sometimes looking over her shoulder to see if I was there. She came home excited most days to show her Dad the craft she made, or repeat the Bible verse. One day, he asked her what she learned and I was blown away to hear her say "Jesus died on the cross for our sins." And just yesterday, we were driving to fetal monitoring and I was talking to her about what it would be like with me in the hospital for four days, and how she would visit me. I was trying to prepare her, but she felt the need to reassure me and said "Don't be scared. God will help you."

I have historically struggled with my faith, (and stories like the Tower of Bable in her children's Bible make no sense to me and don't help!) but in teaching her, she is teaching me. Nothing compares to the sweet, trusting mind of a child and it is a reminder to me that I need to be more child-like in my faith. Seeing these small seeds that were planted last week grow in her has made me more determined to continue her religious education, and we are bringing God into more conversations each day.