June brought the end of first grade and the beginning of summer. And finally, the completion of our pool. Although complete, we still had to wait for a few weeks after it was filled before jumping in together as a family (retrievers included!). Aut had end-of-year celebrations for Girl Scouts, Cha had a birthday party for his bestie, and we worked in quite a few Disney trips. We also found loving homes for all ten of our Golden Retrievers, primarily from word of mouth.

I volunteered for VBS at Autumn's school, and her Aunt/Godmother paid for her to attend a Catholic one as well. We celebrated my birthday and my best friend's birthday with a now legendary dinner at the Hobbit.

Because we had ten puppies, we were not able to work in an international trip as planned, but enjoyed staying home and watching them swim.

I'm really impressed that my hubby actually designed out pool to fit the space. The pool company that we chose first presented the typical, curvy pool that they have placed in hundreds of backyards. But it did not fit our space, so my hubby drew up come other plans. The six foot fireplace, extra large hot tub and the Baja shelves and swim-up barstools were all his idea. While it was initially hard for me to conceptualize, it could not be more perfect. He even had them install a Badu swim jet (alone over 10K) just for me. The only thing we are waiting to get installed are the fire/water bowls along the back wall. And of course, landscaping. But the kids were in there every day since allowed to swim! 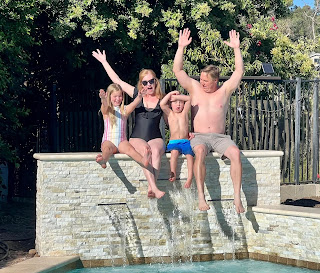 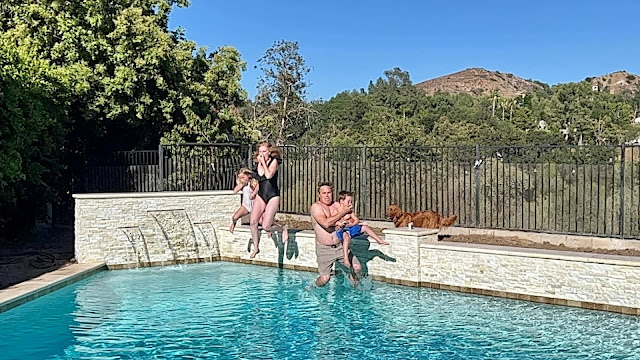 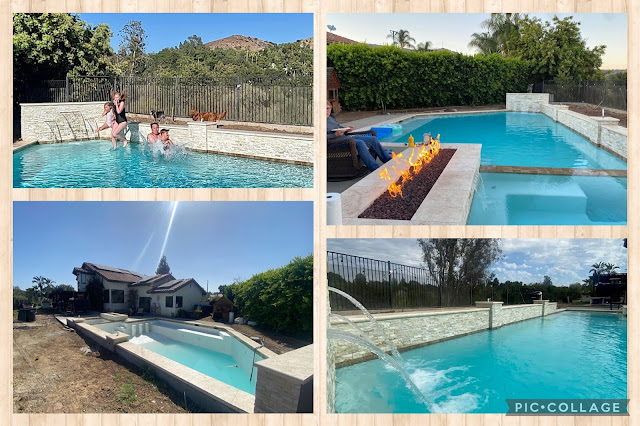 June can't pass by without mentioning that the 28th was my Mom's birthday, and she would have turned 71. When I mentioned that it was her birthday to Aut, she said "Oh Mommy, we need to have a tea party!" and she was excited. I love it that she has formed that connection. And I found a new (to me) song that I listen to when I'm missing her the most. It came out the year before she died.