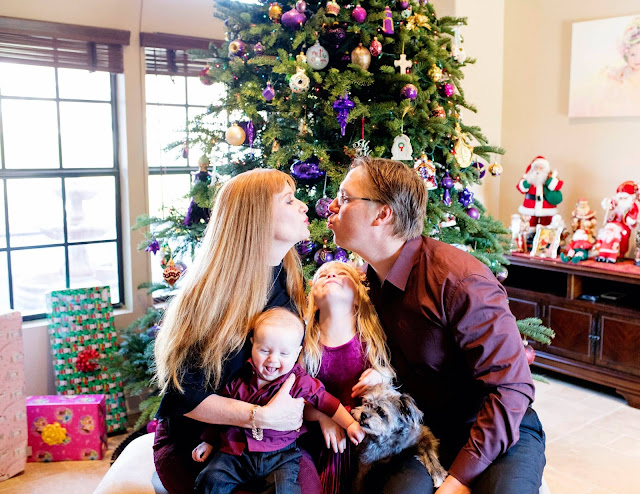 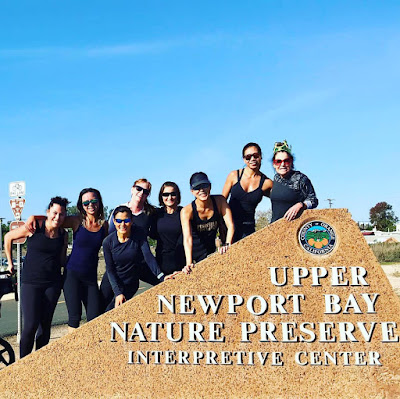 I kicked off this month with a baby-free run with my friends around the Back Bay, where I used to run regularly. An easy run for them, it was about a minute per mile faster than what I was used to and a real struggle for me. The next day, I followed it with a three-mile run and realized that it was much easier because I had pushed myself the day before. I decided to sign up for a half marathon in March to force myself to keep the momentum and start adding in some longer runs. Slowly but surely, my pace improved. For most of my runs, I push both kids in the double B.O.B. which is tough, but great training, making my solo runs faster. By the end of the month, I was surprised to find that I could do a 3 mile run with an average pace of  9:45 when I ran alone, and a 10:45 pace while pushing both of them. Just a few months ago, I was about 12 minutes a mile alone, and 14 with the kids. 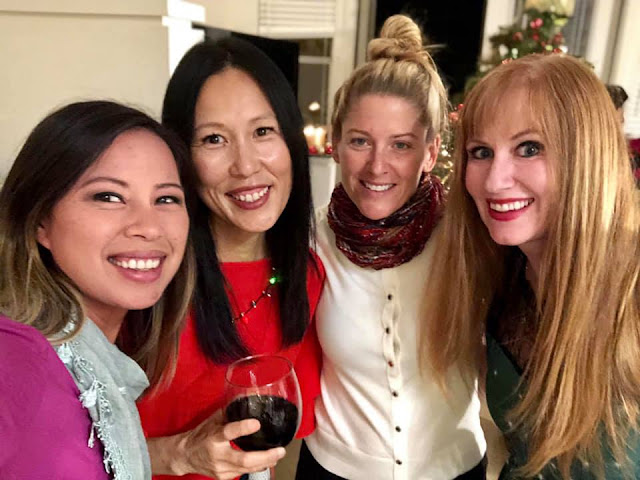 This December was filled with a lot of firsts. Baby's first Christmas, our first in the new home, A's first-time ice skating, first dance recital, first time seeing Disney on Ice, his first trip to Disneyland for Baby C and my first time fitting into my pre-pregnancy jeans. I discovered this one day by accident. I put on the only pair of jeans I owned that fit and headed out the door. While I was out, I realized that they were a different pair; a pair from pre-pregnancy! When I came home, I ran to try on another pair and they fit too! Small successes like this motivated me even more, and by the end of the month, I was running at least 3 miles almost every day, and walking 2-3 every evening.

I gained way too much with baby C. Delivery and the first week left me only 20 pounds lighter, and it was apparent that it was not just "baby weight." Since we've moved into this house, I've lost an average of 10 pounds a month, for a total weight loss of over 60 and yet I still have more to go. Another 6 pounds will bring me to pre-baby A and C weight, but I would like to lose close to twenty more so that I'm back to what I weighed prior to any rounds of IVF. I've been trying to run at least 3 miles most days, and walk 2-3 every day. But the workouts aren't enough. I've also cut way back on my intake because what you eat is still 80% of weight loss (while exercise is only 20%). Send me an email if you would like to know how I've been able to do this or comment below with your email and I'll reach out. I promise I'm not selling a thing, and it's not a wrap! 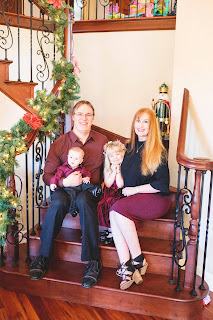 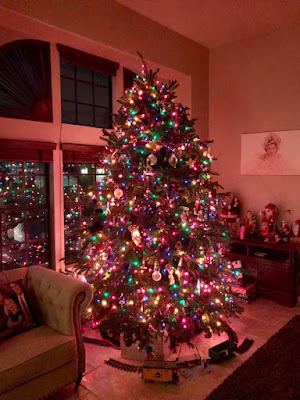 I had dreamed about decorating our home for Christmas since I fell in love with it at the open house. I've never lived in a two-story house, or had vaulted ceilings. We were excited to search out the tallest tree we could find, but didn't realize that 9-10 is the tallest that most lots carry, and they were reasonable. Spending $150 wasn't nearly as bad as we expected. Over 11 feet were close to a thousand.

A's first dance recital was everything I hoped it would be decades ago when I first imagined having a little girl to sit in the audience and watch at a Christmas performance. But after she cried all the way across the stage for their initial "parade" while being led by a parent volunteer, I wasn't too hopeful:

After this, it was a good two hours before she was up with her class. There were so many different classes and studios, so they had each group in a different classroom. Her usual nap-time came and went, and I quickly realized that the uncrustable and fruit snacks I brought for her weren't quite enough. I told her that her Daddy and Grandma were in the audience and that I would be too. "But I can't see you!" "You can't, but I'll be there, I promise. Just do your best" was my parting message for her. Much to my surprise, she nailed it! Although I would have been pleased with any performance by her, I was especially proud.

In the middle of the month, I went with my friend Jen to see Nine Inch Nails at the Hollywood Palladium, which is walking distance from her house. We purchased the tickets six months prior, and I remembered wondering at the time if I would be up for a night out once I had two kids, or would end up selling them like I did with Depeche Mode. I absolutely was and we had a blast. The best moment of the night came after the show when we inadvertently found ourselves in what was quickly turning into the VIP area. We noticed everyone had credentials around their neck. When an employee came by and asked if we had already shown our passes, it was fun to fib and say yes, allowing us extra time there to see what we could see. It would have been interesting if Trent Reznor came out and mingled, like the lead singer of the Goo Goo Dolls had at a previous show. But in reality, we didn't really care. We both had someone waiting at home (well, her someone had gone to retrieve items from coat-check) that was infinitely more important than a picture with a celebrity. So when another employee came round, I said no, we did not have the pass and they asked us to leave. A little tipsy, Jen put her arm around my neck and put her arm out in their direction, saying "Just hold on." Probably thinking we didn't want to leave, she surprised them while we looked around and appreciated the fact that we no longer cared if we were there or not, using some different choice language. Really, we don't give a....they heard her say as we trailed off, arm in arm. 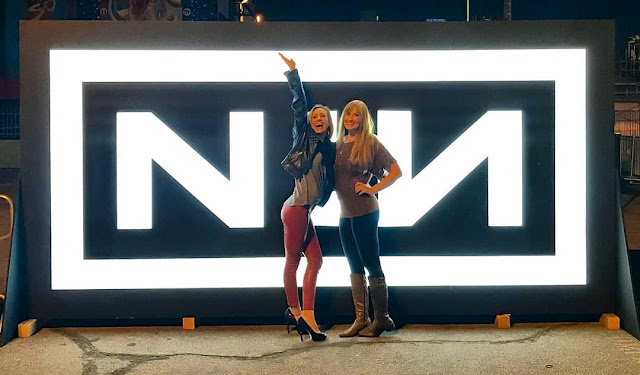 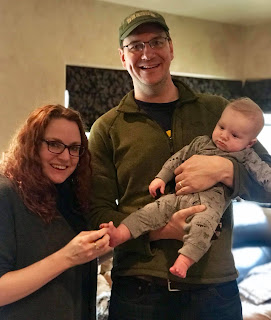 Christmas came and went too quickly. We were able to host Christmas morning in our home. We were both also host to an awful bug, causing my husband and I to both be really sick the majority of Christmas day. Since we were both really sick on A's first Christmas, I guess we were keeping with tradition for his first.

We missed my Dad and brother who were in England, though we celebrated with them before they left and loved following their adventures through four countries. My sister-in-law B gave me a very touching gift, having asked my hubby for my Mom's handwriting which she had etched into a bracelet that read "I love you! Love, Mum" How Mom would have loved the day, and helping with her grandkids, who I was afraid to touch for fear of getting them sick. Instead, Uncle T stepped up to the plate, spending the night here to help care for Chompers. Luckily, the children did not catch it, nor did anyone else, leading me to believe it was food poisoning, not the flu, and sparking a great debate between my husband and I that will never truly be settled. 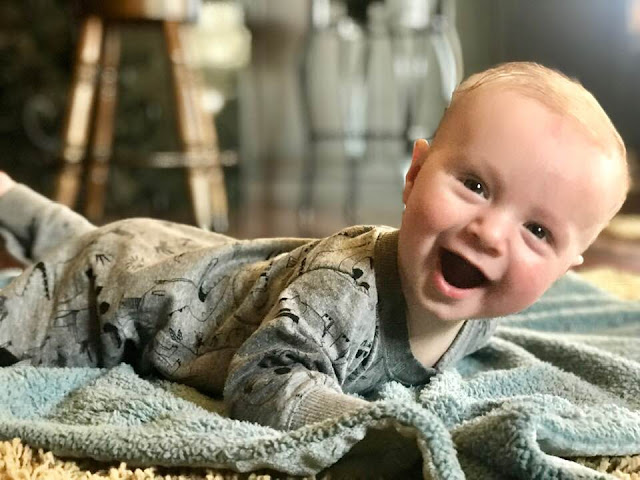 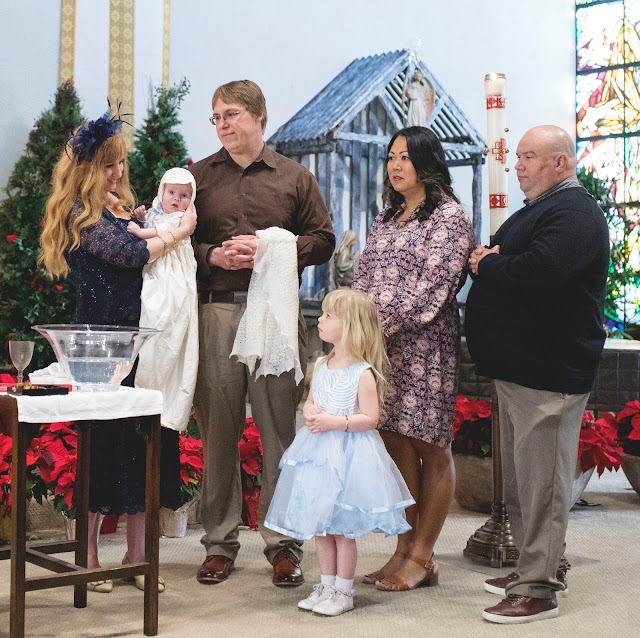 The month concluded with the baptism of our baby boy. We had a private baptism, which was nice because it was so much more personal. He wore an heirloom quality silk gown hand sewn in London that my Dad ordered for the occasion, paying homage to Mom. It is a gown that I hope he will use for the Baptism of his child(ren). Also in her honor, the priest poured the baptismal water over his head using the chalice that my Dad gave to my Mom on her 19th birthday. After the ceremony, we hosted a luncheon at Watson's in Old Town Orange. 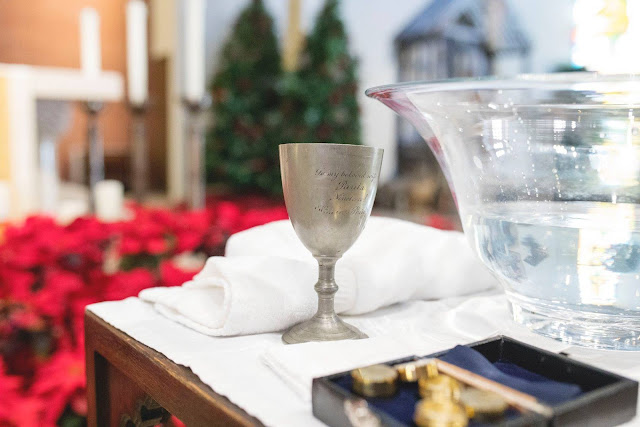